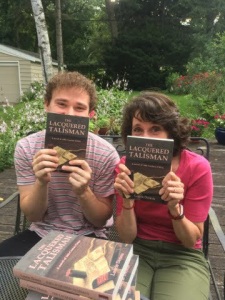 Structuring a novel is a murky process, but one moment stands out in my mind as key to both my novel, The Lacquered Talisman, and its cover, which was created by my son.

I was sitting on the floor of a bookstore in Boston, flipping through art books about China, when suddenly it hit me: What I needed for my main character was a talisman. And this talisman would be a seal chop. The Lacquered Talisman is about the Zhu family, whose youngest son founded the Ming Dynasty in 1368. I needed a tangible item that could symbolize family for my protagonist. Thus the talisman.

is literary device in my novel became a stylized version of an actual item that sits on my writing desk. It’s a polished black plastic box that a friend gave me years ago, when I was living in Jiangxi Province and working as an English teacher. The finger-sized box has a sliding lid that opens to reveal two compartments, one holding red ink, and the other a small chop, carved at one end with my Chinese name. For The Lacquered Talisman, the chop would be modified in various ways that became my job as a writer to convey so that the reader could understand and relate to the item. As I was writing, I often picked up my chop box and held it in my hand, gazing at this small oval object as I imagined its mystical counterpart hanging on a leather string around my protagonist’s neck and making its way through my novel.

When it came time to think about book covers, I knew that I needed to feature the talisman. But how to do this? I can’t draw, and as a first-time author, I wondered how much control I would have over my cover, that critical image and first connection of a reader with my story. How would I explain my chop box to an illustrator?

Luckily, my son is an artist. And luckily my publisher was willing to humor a mom who wanted her son to design her book cover. 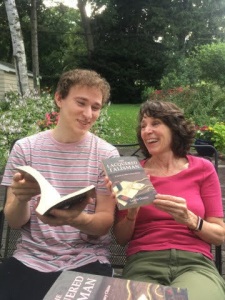 My son, Kerry, is a student in the University of Wisconsin-Milwaukee’s Peck School of the Arts. And to my everlasting good luck, he was taking a class in digital arts the very semester when I was needing a book cover. It became his midterm.

I’m not sure how a writer is supposed to interact with a book cover designer, but as a mom talking to her son, I was able to be very specific. Maybe even bossy. And I could pester the artist as much as I wanted.

Kerry got to learn about Chinese talismanic writing, and try it out for himself.  This is an esoteric and magical form of writing used on Daoist charms and intended as a way to summon the gods. 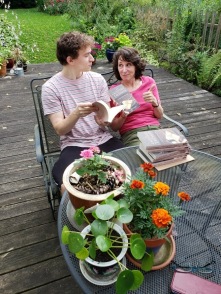 Kerry worked patiently through all my requests, and then started to ignore them, turning the cover into his own piece of art, which is what artists do. So I stepped back and let the cover proceed until we had something that we could both admire. Like the talisman itself, the book cover evolved into a motif for our family’s investment in this story, which has taken me years to write, a story about families that has been immersed in my own family and benefited from that synthesis.

The book cover was eventually turned in – to both Kerry’s teacher and my publisher. And now my published novel sits on my desk, right next to my little black chop box. I consider these my good luck charms for Book 2, cover yet to be determined.