Line 41: The city was taken 陷城. This refers to the walled city of Haozhou 濠州, which Guo Zixing 郭子兴 captured with a small force of Red Turbans. Haozhou no longer exists. After the Ming founding, Zhu Yuanzhang reorganized his home district and created Fengyang. Haozhou was situated at the confluence of the Hao River with the larger Huai River 淮河.

Line 42: They encountered no defenders 拒守不去.  According to Wu Han’s biography of Zhu Yuanzhang (see Sources, “Wu Han”), “On the 27th day of the second month (of 1352), Guo Zixing led several thousand men on a midnight raid of Haozhou.  When the signal cannon sounded, the raiders charged the yamen gate and killed the magistrate…The Yuan general Cheli Buqa was camped many li away from Haozhou and feared the ferocity of the Red Army to the point that he refused to attack.”

Line 43: A friend 友人.  In the 1965 edition of Wu Han’s biography of Zhu Yuanzhang, Wu cites Tang He 汤和 as the “friend,” though the 1949 edition is not clear on this point, saying only that Zhu went to discuss the letter with Tang.  Wang Jianying concurs with this speculation, also citing Tang He’s epitaph, which says that Tang was already in Haozhou serving Guo Zixing when Zhu came to join the rebels.  (See Sources, “Wang Jianying.) Tang He was a childhood friend, and would go on to be one of Zhu’s most trusted military leaders.  The photo above is a statue of Tang He, situated at the right hand of the main Zhu Yuanzhang image in Fengyang’s Longxing Temple (see the annotation to Line 38). Submit 降.  The letter advised that Zhu come to Haozhou and join the rebellion, which would mean submitting to the authority of Guo Zixing.

Line 44: But I was too worried and afraid 既憂且懼.  Zhu was afraid to leave the temple sanctuary and did not know if he could make it safely into Haozhou, as he is about to explain.  And his fears were justified, as he makes clear in Line 52.

Line 45: Others were aware of the letter and wanted to reveal its contents. 傍有覺者，將欲聲揚。  Guo Zixing was not the only leader at Haozhou.  Wu Han and other sources lists Sun Deya 孙得崖 as a rival commander at that point.  So the “others” Zhu is concerned about were likely either Sun’s supporters, or perhaps anti-Red Turban locals who would reveal the letter to the government authorities.

Line 47: I can either have my hands bound like a criminal, or raise my arms in resistance and end up killed 果束手以待罪，亦奮臂而相戕!  Zhu meant that the authorities could arrest him on suspicion of being a rebel, or he could join the rebellion and be killed in the fighting. He explains the problem in more detail in “Story of a Dream,” as translated into English by Prof. Taylor: “Two hazards made it difficult for me to decide what to do.  I was afraid that if I came out of hiding and gave myself up to the Yuan authorities they would put a red headband on me and take my life.  But I was also afraid that if I did not come forth, the red army would come into my neighborhood and cut me off before my time.”  The “red headband” and “red army” are references to the Red Turban rebellion, which was spreading across the Chinese heartland, threatening Yuan (or Mongol) Dynasty control.  Guo Zixing is leading a faction of Red Turbans.  Note that I have added in “in resistance” to the latter half of this sentence, since I feel it is implied.

Line 48: This sentence contains the advice given by Zhu’s consultant.  The next sentence moves on to how Zhu reacted to the advice.

Line 49: I went to divine 往卜.  “Story of a Dream” adds that Zhu went to pray to (and thus divine before) the guardian god of his temple, the Qielan 伽藍 Buddha.

Line 50: The divinity answered with a yin-yin reply as a warning 神乃陰陰乎有警.  Zhu is divining the will of Heaven by tossing a pair of shells before a divinity.  These shells are known as jiao cups (杯珓) and typically carved from wood or bamboo in the shape of clam shells.  If a shell lands on its back, the concave side face up, this is a “yang” result.  The other option, with the exterior of the shell facing up, is a “yin” result.

NOTE: Text highlighted in blue is quoted from the post “Lines 41-50,” which has the full Chinese text and English translation for this section of the Huangling Bei. 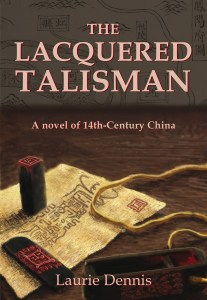